I love having a little something to snack on mid-morning when I’m at the office. Usually I pick up some Enjoy Life bars when I’m at the store but they didn’t have any when I was there today.

Plus, you get five in a box and at $5.99/box, they aren’t a bargain! So I decided to pull out my Snack Bar Maker and make my own! I was able to make them GF/DF using GF oatmeal and Enjoy Life mini morsels.

I used this recipe and it was so easy! Why don’t I made these every week? And I’m super happy to have this week’s snacks ready to go!

Some of the links in this post may be affiliate links. Colleen Finley is an independent advanced director for Pampered Chef. She earns a commission by linking to products she uses and trusts. If you purchase a product through her website link, your cost will be the same, and Colleen will automatically receive a small commission. Your support is greatly appreciated and helps us enrich lives, one meal and one memory at a time! 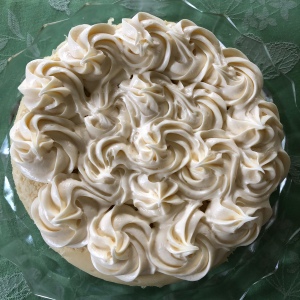 Wednesday was my friend and neighbor’s birthday. Tonight the girls are getting together for a little celebration!

I had planned to bring my 7-Layer Mediterranean Dip but decided this afternoon to make her a cake instead!

I’ve made this cake a handful of times and it always turns out just perfectly. Since it’s made in the microwave, it’s very, very light. I also took a shortcut and used tub frosting. These decorating bags make decorating anything a breeze. Plus, you can use any brand of tips with them.

When scrolling through Instagram, I saw a post about vodka-infused frosting and obviously it intrigued me! I thought about giving that a try but then realized there would be a handful of kids there! Guess I’ll be giving that a go at another time!

Some of the links in this post may be affiliate links. Colleen Finley is an independent advanced director for Pampered Chef. She earns a commission by linking to products she uses and trusts. If you purchase a product through her website link, your cost will be the same, and Colleen will automatically receive a small commission. Your support is greatly appreciated and helps us enrich lives, one meal and one memory at a time!

I love layered dips like this! I think it all started when I had a 7-Layer Mexican Dip from the deli section of the grocery store back in high school. There is just something about a scoop full of several flavors at once!

Another reason I love these dips is that you can customize them to any particular tastes! Don’t like feta? Leave it out! Not of fan of kalamata olives? No biggie… use back olives instead!

For this dip, I spread all of my favorite flavors and then serve it alongside a big bowl of salty tortilla chips!

On a serving plate or platter, spread the hummus to the edges. Top with the pesto, spreading to the edges. Scatter the red pepper, olives, feta and green onions over the top. Sprinkle with parsley to finish.

I FINALLY had my parathyroidectomy last Friday! It feels like it’s been such a long road. While I was really just diagnosed last September, I’m so thankful to be on the healing end.

The last year has been such an education. And I learned more in the last two weeks than I have in the last year! While the dietary changes have helped me feel immensely better, they weren’t enough to cure my disease or even slow down it’s progression.

When my doctor suggested I see an endocrinologist, I thought it would be easy to get in to see one. Not so much. The local one here had a several month wait time and thankfully through some connections with my brother, I was able to see an incredible doctor in Philadelphia. He explained the disease so thoroughly and helped Bill and I to really understand how it’s been effective me both physically and emotionally. He also said that it wasn’t my diet that caused it… it’s just something I’m predisposed to. He also said that in his opinion, it needed to be removed sooner rather than later.

He referred me to the surgeon who was just as wonderful. He explained everything even more clearly and after the appointment I had such a sense of relief and justification that everything I’ve been feeling for at least the last two years was due to this and not every excuse I was making. When I was exhausted I’d blame it on working so much. When I was depressed I blamed it on being sad about losing my dad. When I was achy I blamed it on working out too much or not working out enough. When I didn’t feel well, I blamed it on something I ate. And all this time it was something in my neck the size of a grain of rice that was the culprit.

Before I met with the surgeon, I did my research and one of the biggest themes was to be sure to ask the dr to check all 4 parathyroid glands to make sure there wasn’t more than one infected. Thankfully the dr explained that there was no need for that now, due to modern medicine!

After my appointment I felt so at ease and knew we were definitely on the right track. And we scheduled it to happen 3 days later. Which I was very thankful for… I didn’t need a month of thinking about it.

I was scheduled for 1pm surgery and needed to arrive at 11:30am. We actually made great time in traffic and arrived an hour early.  When you check in you get a number that corresponds with a big board in the waiting area. It kind of looks like the arrivals and departures monitors at the airport. Each patient has a number and next to it is their current status: pre-op, in surgery, post-op, recovery.

By 11am I was in the pre-op in my gown and ready to go. I had just switched on HGTV to pass the time when I overheard someone call out my last name and “Room 3! ASAP! ASAP! ASAP!” Well, I knew I wasn’t in any crisis or an emergency but it did make me wonder in a little bit of a frightened way!

Then a swarm of nurses, technicians and several others came in and started getting me moving. When I asked what was going on they said that my surgeon had finished his previous surgery early and was ready for me. Which I was very thankful for. I was a little hesitant when they said they could get me in at 1pm on a Friday afternoon. All I thought was, “Geez… what if he’s running late… then what?” So happy I didn’t have to worry about that!

Since I’d never had any kind of surgery before and it was all unknown, it was probably better that I had no idea what to expect. That way I wasn’t too scared. I did get a little weepy at one point though but I’m sure that’s to be expected and I’m certain they’ve seen worse!

The IV line went in and then I received a shot in my stomach (I actually thought the nurse was kidding when she told me she was going to give me a shot in my stomach!). Then I signed some papers, more people spoke to me and off we went. Before I knew it I was in the operating room and they were asking me what kind of music I wanted to help me relax.

The thoughts in my head at that moment? “Are you kidding me? I have no idea!”, “Hmmm… what kind of music relaxes me?”, “Please don’t play Elvis… anything but Elvis!” Before I could say a word, the young male nurse who could probably be my son said, “She looks like she likes Aerosmith.” Which I do but probably wouldn’t have been my first choice in the relaxation category!

I think I muttered something along the lines of “Whatever makes Dr Pak feel the most relaxed…” Then I heard Aerosmith, saw my surgeon walk in and then nothing…

He was able to locate the infected gland immediately and remove it. Then he waited 15 minutes and did the blood test. The plan was if my levels dropped to normal, they had the right one and wouldn’t need to look at the others. As expected, that’s what happened and he closed me up!

The next thing I knew I was in post-op. The nurse was asking my pain level and administering something through the IV. The first dose didn’t help. The second helped a bit and then the third was just way too much. I didn’t feel very good after that. Then they moved me into the recovery area.

At that point I was starving!  They gave me crackers and ginger ale and I waited for Bill to come in. Then I got dressed and we were on our way home!

The worst was the sore throat from the breathing tube and feeling dizzy from the anesthesia. But I can totally feel that I am on the mend! 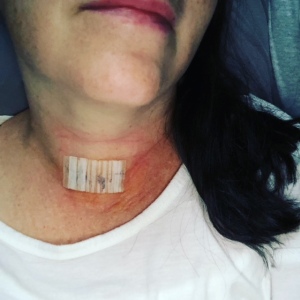 This morning I am a bit red and decided not to go into work for the next few days so I can relax and be 100%. And on Saturday I could feel my lips tingling which is another great sign. That means my calcium is low!

So for anyone who might be facing this too… you’ll be so thankful when it’s done. I promise!

With having to shift my diet to gluten-free and dairy-free, I’m excited to share what I’m cooking in hopes they will help you lead a healthier lifestyle while at the same time offering LOTS of flavor!

In real life, I reside in Wyomissing Hills, PA with my love who is my biggest fan and recipe tester! I have 2 jobs alongside this blog… First a foremost, I am an Independent Advanced Director with Pampered Chef and have enjoyed that role for 20 years! I am also an Executive Administrative Assistant for Berkshire Investment Group. Lots to juggle and I’m loving every single minute of it!

Please send any questions, comments or requests to SliceDiceDish at gmail dot com.

Disclaimer: Slice, Dice & Dish is not an official Pampered Chef blog/website. Pampered Chef is not involved in any way with this blog.  The reviews and comments about any products are always my own. If I like something, I really do like it. And I’m not afraid to say if I don’t. To learn more about what I offer through Pampered Chef and to shop my kitchen, please visit my Pampered Chef website at:
pamperedchef.biz/colleenfinley